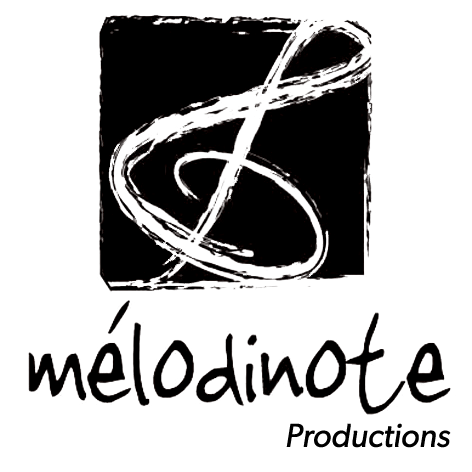 Mélodinote structure was created in 2006 in Bordeaux and its action is based on the production and broadcasting of concerts. Mélodinote has a roster of musical artists and accompanies them on tour (search for concert dates, programmer relations) and the development of their musical projects (production management, search for residency locations, communication assistance…). A Label activity is also expressed in the phonographic production of albums by the artists in the roster, as well as a choice to diversify with the offer of musical shows for Young Public.

Very attached to the notions of sharing and exchange, Mélodinote has developed over the years through human and artistic encounters, while maintaining the common thread of acoustics, the main common denominator between the formations hosted within the structure. A musical colour that has not been denied, mixing jazz, world music and current music.

In an operational way, the association has designed a programme to support the artists it develops. This support is based on artistic expertise and includes support for the local, national and international development of artists, as well as assistance for creation, promotion, production of shows…

With the diffusion of shows as a central point, Mélodinote’s role is to build a coherent and strategic programming in the artist’s career with the organisers, in the double logic of the show and the place. This implies a real formalization of the project: beyond its artistic cohesion, its fixation on a medium (audio, video…) when necessary, the definition of its organizational and technical constraints (travel, reception conditions, technical riders…), the design of its means of promotion (posters, visuals…) and especially the alignment of the artistic purpose with the realities and needs of the programming space.

Mélodinote doesn’t add artists on lists to its catalogue, but favours a close relationship and a work that is followed over time. We hope that the new collaborations in 2018 will therefore take place over several years, and will make it possible to really build and promote the various artistic projects.

Mélodinote association is moving towards distribution projects for 2019, in order to create new spaces for the discovery of the musical artists it supports. It is therefore with a permanent concern for sustainability and professionalism that the structure has developed to accompany and support an ever-increasing number of emerging artists.
This collective adventure continues to grow, and its members are more aware than ever that the success of their actions will depend on a logic of networks and partnerships. The pooling of practices and know-how are essential vectors in a fragile professional environment.

Mélodinote thus claims its place in a form of “creative solidarity economy” where economic risk is spread over several projects and where profits are redistributed within the same catalogue: between emerging and more assertive developing artists, but also between creations in the effective dissemination phase and those still in experimentation, according to cycles that can also alternate.

Favour a good relationship with our artists, support, help, advice :

A profession based on trust, sincerity and ideas, it makes it possible to establish privileged relationships with artists (artistic history of a record for example). You have to understand where the artist wants to go, see who he would like to work with, help him meet people so that he can enrich his field of perspective. The ultimate goal is for artists to succeed in their careers with a loyal audience that follows them.

The artist created and our role is to help him because we are at the service of his work by trying to give him our thoughts so that his ideas keep their authenticity and strength. Humility is essential to obtain the artists’ trust and for them to see Melodinote as a partner who understands and supports them.

Mélodinote’s communication aims to optimise its visibility and influence with its various stakeholders in order to enhance its actions, develop its reputation and legitimise its position at all levels : programmers, artists, partners, institutions, actors in the sector, networks, the general public… Its objectives are as follows :

✔ To give Mélodinote a strong, understandable, accessible and recognizable identity,

✔ Facilitate the flow of information between programmers and our artists,

✔ To promote our actions at the local, national and international levels through our artists,

✔ To establish and legitimize Mélodinote’s position among institutions, existing networks and players in the music industry, 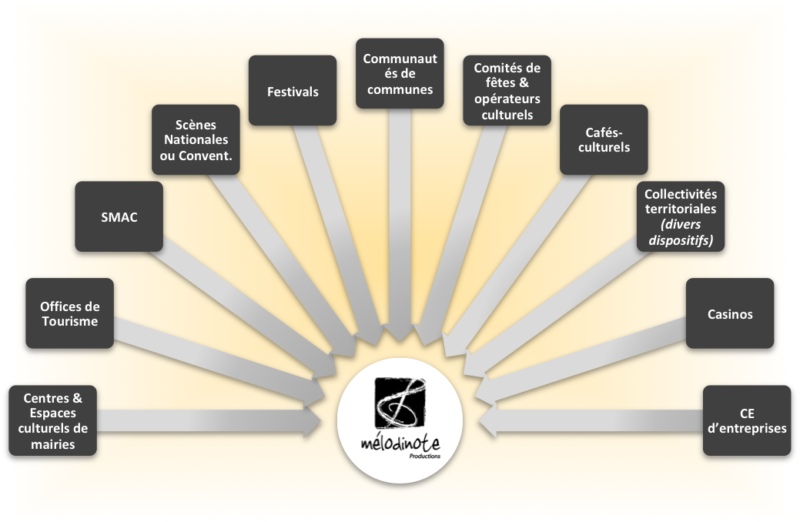 This diversity of venues reflects the diversity of our artistic proposals, which goes beyond the traditional divisions.